Since Kids In Danger was founded in 1998 after the death of Danny Keysar in a poorly designed, untested portable crib, KID has focused on one main point: Children’s products should be independently tested to rigorous mandatory standards before they are sold, not half-heartedly recalled after they have caused injury.

And with the passage of CPSIA in 2008, containing the Danny Keysar Child Product Safety Notification Act; that vision became reality. Now, CPSC has drafted two tough mandatory standards for full-size and non-full-size cribs. Today was the last day to submit comments, which KID has done. Read our comments here. (PDF)

You can go to Regulations.gov and pull up docket number CPSC-2010-0075 to read the proposed standards as well as the many comments submitted. (You even have a few hours left to submit your own!)

KID applauds the actions CPSC has taken to take dangerous cribs and portable cribs off store shelves and homes. We believe these new standards will give parents confidence that cribs that meet the standard are the safest place for their babies to sleep. Among the changes from the old voluntary standards:

The usual effective date for new standards or rules has been six months after final publication — which in this case would be around the middle of 2011. Because of the impact on child care facilities, KID is recommending that they have an additional six months to comply — still leaving the effective date for manufacturers and the sale of the products at six months.

We’d love to hear your thoughts on the new crib standards. KID has always believed that parents assume when they buy a new crib or other children’s product that someone, somewhere has made sure it is safe. Now we can say that will be the truth! There is still more to be done — these standards don’t apply to mesh sided portable cribs and play yards and there are other products still waiting for mandatory standards such as high chairs and strollers, but progress is being made.

Update: Here are the comments from our allies at Consumer Federation of America and you can read all the comments here. 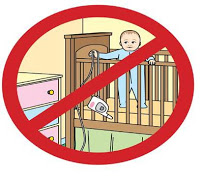