Tomorrow is the day

It feels a little like the eve of the first day of school – some of us are very excited and can’t wait; others, not so much.

Tomorrow, CPSC will launch their new publically-accessible consumer database at saferproducts.gov. Now, just as is already the case with cars, medicine and medical devices, consumers will have a place to report incidents with products as well as look for safety information that other consumers might have entered. Manufacturers seem to be dreading the change in the current situation – where they have all the power to determine what safety information consumers know about their products.

We’ll have more tomorrow on using the database.

For today, here are some statements from parents who have already lost children to unsafe products – they know the importance of this new database.

The CPSC database gives parents, grandparents, families, friends, medical personnel, and even retailers, IMMEDIATE and FREE access to information regarding problems reported on a particular product, not just those few which rise to the surface because a child has either died or been seriously injured by the product. By that time, it is dangerously too late. It could take months, as it did in Ellie’s case, before the public has knowledge of this essential information.

Lisa, mother of Ellie who was killed in a Graco play yard with a changing table accessory in 2002.

I firmly believe that if such a database was in effect in the 1990s my son, Tyler, would be alive today. Tyler died when a dangerous drop side crib strangled him. Tyler was not the first (and sadly, not the last) to die due to the inherently flawed crib design. If I, as a consumer, knew about the other babies who died in drop side cribs I would never have purchased that deathtrap. A public database would have empowered me to make a more informed decision about a product intended to be my Tyler’s safe haven.

Michelle, mother of Tyler, who died in 1998, entrapped by a drop-side crib.

If I had known there had been children killed in drop-sides, it would have swayed me against them.

KID believes this database is an important tool for consumers – both to report information they believe will keep other consumers safe and to research products they own or are considering purchasing. It will give CPSC and others tools to identify emerging hazards and injury trends. Contrary to the fears of some – KID won’t be entering data – we’ll be too busy making sure parents are aware of this great safety resource. 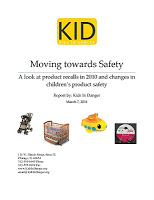