As we prepared for the June 28, 2011 implementation of the new strong crib standard from CPSC, we were shocked to hear that at the 11th hour some wanted to put the brakes on the new standard — delaying implementation of the requirement that only cribs meeting the new standard be sold. A subset of retailers found themselves with too many of the noncompliant cribs still to sell. Whether this was from the general economic situation or poor business management isn’t clear. Other retailers rushed to assure CPSC they had worked hard to comply with the law and would be harmed if CPSC changed the rules in the middle of the game.

We firmly believe CPSC needed to deny the request. The date has been known for at least six months and will end the confusion over whether cribs being sold are safe or not. Right now, drop-side cribs, a design that has been banned in the new standard and other cribs that can’t meet the new rigorous standard, are still for sale. That won’t stop until the effective date passes.

And today, after hearing from the CPSC small business ombudsman, CPSC did vote to keep the June 28th date in place. So, starting in less than two weeks, consumers can be assured that cribs for sale, new or used, will meet the new standard.

That means in addition to the ban on drop-side designs, that the mattress supports and slats will be sturdier and the crib passed rigorous durability testing. The proponents of the delay (Commissioners Northup and Nord) spoke of ‘just’ a few additional months to sell through inventory. But those few months would translate into years of noncompliant cribs being in use, passed down to friends and families and ten years from now we would still be seeing the impact of allowing cribs that can’t meet durability testing allowed onto the market.

CPSC did vote to allow rental businesses to continue to rent older cribs through December 28, 2012, the same deadline that applies to child care and hotels. While we aren’t happy with the extension, at least that date is the last date those cribs will be used. But because the condition of these cribs can’t be known until that effective date, we recommend families bring their own portable cribs (checked against recall list!) with them when they travel until then. 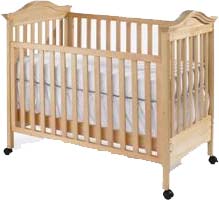