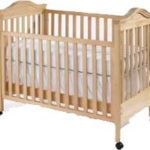 It’s been a long time coming, but starting today – all cribs sold in the US must meet tough new standards – giving parents peace of mind so they can get some sleep too!  From KID’s founding until the passage of the Consumer Product Safety Improvement Act of 2008 (CPSIA), manufacturers and regulators seemed deaf to our calls that cribs and other juvenile products should be tested to mandatory standards by independent labs.  But with the passage of CPSIA, new leadership at CPSC and a renewed commitment to safety, we now have the world’s toughest crib standards.

After years of crib recalls, reports of deaths in unsafe cribs and heel-dragging by the industry, today marks the effective date of the world’s toughest standard for baby cribs. A requirement of the CPSIA, the new standards will ensure that cribs sold after today will be durable and safe.

Over 12 million cribs have been recalled for faulty hardware, breaking slats, dangerous drop-side designs and other flaws in the last four years.  Almost all of them had passed the weak industry testing standards that were currently available. This new standard will assure that cribs being sold will be safe and durable – providing peace of mind to parents and safety for children.

This morning, KID will join US Representative Jan Schakowsky, Illinois Attorney General Lisa Madigan, and representatives of Illinois Action for Children and SIDS of Illinois to commemorate the standards’ effective date.

The US Consumer Product Safety Commission developed the new standards and adopted them in December 2008.  They provide much needed rigorous test requirements along with the requirement that the testing be done by independent labs.  The new standards require:

The requirement that cribs and other juvenile products be subject to third party testing and strong mandatory standards was first introduced in Congress in 2001 by US Representative Jan Schakowsky (IL-9).  The provisions were incorporated into the 2008 CPSIA in a section named in Danny Keysar’s honor.

The new mandatory standard in addition to being the world’s strongest, also is unique in that starting today, it is illegal to sell cribs that do not meet this tough new standard.  That provision extends to used sales as well, assuring that yesterday’s dangerous cribs won’t continue to be sold or traded in the future.

After 18 months, all child care facilities and other public accommodations will have to provide only cribs meeting the new standards.  This will give parents reassurance that their children will sleep safely while in child care as well.

Retailers have been preparing for today by selling all their older stock and getting new product from the manufacturers.  Every crib sold from today forward must meet the standard.  Parents can ask retailers which standards the cribs meet – it should be 16 CFR 1219 for full size cribs or 16 CFR 1220 for non-full size cribs.  The CPSC has excellent resources at their website, both a Q&A and poster (PDF).

Selling a crib that doesn’t meet the new standard is illegal and noncompliant cribs cannot be donated to charity.  Parents who are using older cribs might consider replacing them, especially if they are drop-side cribs.  If cribs that don’t meet the new standard are seen being sold at retail, online or at rummage or garage sales, contact the US Consumer Product Safety Commission at 800-638-2772 or on the CPSC contact page, or the Illinois Attorney General at 888-414-7678.

KID would also like to hear your experiences shopping for new cribs in these next few weeks.  Are retailers ready for the change with a wide variety of cribs?  Is it clearly marked that the cribs meet the new standards?  Use the comments here to let us know your experience. 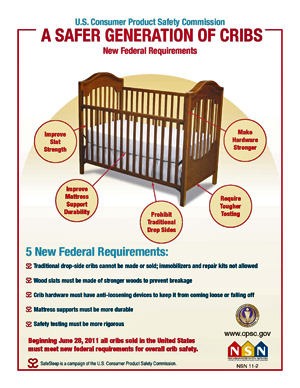