Aiden suffocated on the crib bumper pad in his crib. He was six months old. 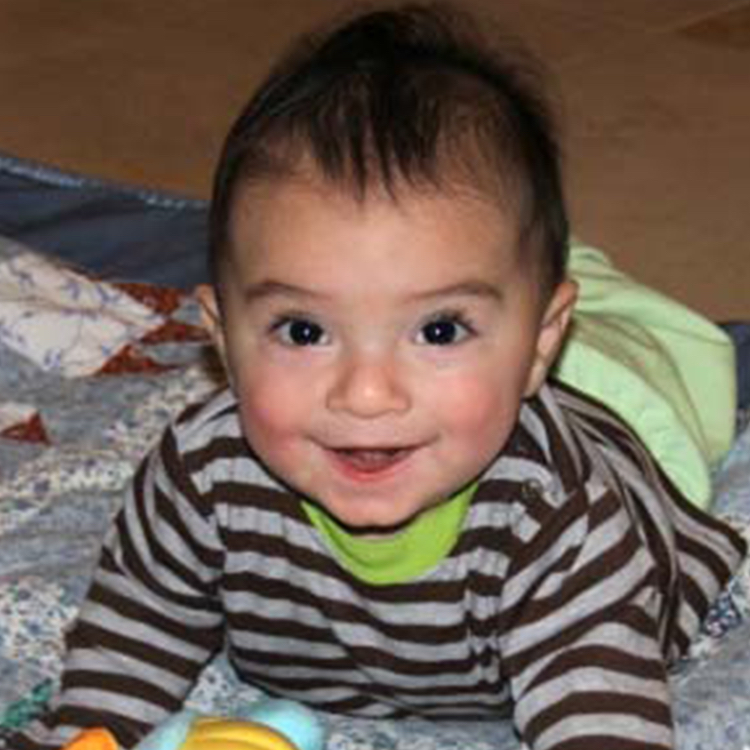 Submitted by his grandmother

“I want to tell you about my grandson, Aiden, but words are woefully insufficient to tell you just how much he meant to me, to his incredible parents, to my husband, and to his extended family.

Aiden was born on August 13, 2009. I always felt he was our “lucky 13”. He was so beautiful that my emotions were too much to contain, and the tears of happiness came immediately and spontaneously, and for the duration of his short life, everything about Aiden continued to fill me with that amazing joy.

Aiden was robbed of his life, and we of the immense joy he brought to us, because of a crib bumper pad. He rolled into a corner of his crib and, according to medical experts, died silently as he re-breathed the stale air in the corner of his crib.

In Aiden’s name, I hope to influence the regulation of for these products. Why is it that we as consumers are left ignorant of the dangers of such products? I bought the very pad that took my beloved grandson’s life, thinking that it was a necessary part of the newborn nursery. Never once did I ever consider that they might be lethal. I assumed that products sold for children had been thoroughly tested and deemed safe.

I’m here to put the industry on notice so that Aiden won’t have died in vain. He is and always will be my beloved Peanut, and I will cherish him forever. Thank you, Peanut, for the light you brought to my life. I vow to fight in your name, and I will love you forever.”

Since Aiden’s death many activists, parents and caregivers have spoken out against crib bumpers. A study in the Journal of Pediatrics found 27 deaths related to bumper pads or padded bassinets between 1985 and 2007. In April of 2012, Chicago became the first city in the U.S. to ban the sale of crib bumper pads. In 2013, Maryland followed suit, becoming the first state to ban these dangerous products. More recently, both the state of Ohio and the borough of Watchung, New Jersey also banned non-mesh crib bumper pads.

In 2013, we surveyed Chicago stores to see if they displayed crib bumpers. The results were encouraging; of the 14 stores, only 3 displayed bumper pads or had them in stock. KID decided to look into the availability of crib bumper pads from online retailers, and the results were discouraging. Of the 33 online retailers we surveyed, 25 (78.1%, or the vast majority), permitted us to order and ship bumper pads to addresses in both Chicago and Maryland. In May 2022, in major victory for infants and parent-advocates, Congress passed the Safe Sleep for Babies Act which will ban the sale and manufacture of padded crib bumper pads.