On September 10, 2009, US Consumer Product Safety (CPSC) Chairman Inez Tenenbaum appeared before the House sub-committee on Commerce, Trade and Consumer Protection. The Commerce Committee chairman, Henry Waxman and the sub-committee’s chairman, Bobby Rush, called the hearing to get an update on her first few months in office and address some pressing issues such as the implementation of the Consumer Product Safety Improvement Act (CPSIA) of 2008, progress in investigating the hazards of drywall imported from China, and general product safety issues.

Most of the time was spent on opening statements from members and Chairman Tenenbaum. Questions for the chair seemed to concentrate most on concerns with CPSIA implementation and questions from Louisiana and Florida representatives about the terrible problems their communities –already hard-hit with past hurricanes– were having with imported drywall.

Tenenbaum spoke of the progress her agency has made on implementing the CPSIA as well as issues that still remain to be resolved. But she appeared confident, that given enough time and resources, her agency could make the landmark law work well with tools they already had. It was too early, she said, to call for legislative changes to the law. She again reiterated her goals of “transparency and openness to those we serve; a renewed focus on education and advocacy to all American consumers; and fair, but firm enforcement of the product safety laws we oversee” Just that morning her team had delivered a required report to Congress on their plans for a public database.

For those who want to learn more about the drywall issue, CPSC has a dedicated page that even includes summaries of incident data — we’d love to see that for cribs! To keep up with the implementation of the CPSIA, check out that dedicated page or the list of CPSC items on the Federal Register that are open for comment. 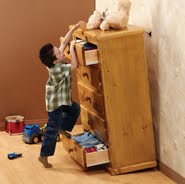