A week of progress on crib safety

I’ve been in Washington, DC this week to work on crib safety.

Up first, two days of an ASTM (voluntary standard setting body) meeting at the Consumer Product Safety Commission (CPSC) on beefing up the voluntary standard that has governed crib safety for the past several decades. Under the requirements in the landmark Consumer Product Safety Improvement Act of 2008 (CPSIA), CPSC now must develop mandatory standards to cover crib and other durable infant and toddler products. Suddenly, testing methods and performance requirements that were shunned by industry for years are now on the table for a strong standard. The participating groups — testing labs, consumers, manufacturers and CPSC worked hard to address all the hazard patterns that CPSC has seen in incident reports — dropside failures, hardware failure, mattress support collapses, breaking slats and more.

By sometime this summer, CPSC should be posting an NPR (notice of rulemaking) with the new regulations on cribs to be in the place by the end of the year.

Then today, KID, along with Susan & Robert Cirigliano, the Juvenile Products Manufacturers Association (JPMA) and CPSC Chairman Inez Tenenbaum testified before the House Subcommittee on Oversight and Investigation. The Committee had called hearing on crib safety and the need for greater oversight after becoming alarmed by the million of cribs recalled recently.

Susan and Robert (pictured at right with CPSC Chairman Inez Tenenbaum) are the parents of Bobby, who died in a dropside crib when he was six months old in 2004. Susan gave moving testimony of what an unsafe product took from their family and the steps they 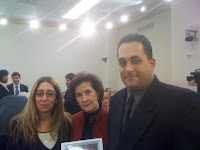 think are needed to protect other children from the same fate. She called for a ban on drop-side crib designs as well as better reporting of incidents and data tracking at CPSC.

JPMA executive director Mike Dwyer also testified about their certification program and their work with ASTM in developing the voluntary standard. He did not attempt to answer the question as to why millions of their certified cribs, bassinets and play yards have been recalled in the last two years and was cut short by the Committee members when he tried to shift the blame to the parents in the death involved in the recent Dorel Asia crib recall. (Dorel Asia’s cribs are not part of the JPMA certification program.) That being said, JPMA members worked hard the last two days at CPSC to develop a much stronger standard — now that it is required.

KID’s testimony centered not only on the frustrating history of trying to strengthen the voluntary crib standard, but with consumer expectations and use of cribs and other things CPSC could do to improve crib safety. These include continuing their work on a public database of consumer incident information and increasing recall effectiveness.

CPSC Chairman Tenenbaum spoke of her commitment to improving crib safety and looking at ways CPSC can react more quickly to reports of unsafe products. She gave her personal commitment that there would be a strong mandatory standard by year’s end. Given her staff’s hard work toward that objective we have confidence CPSC will meet that goal. KID will be an active participant, along with other consumer organizations such as Consumer Federation of America and Keeping Babies Safe, to make sure the new rules are strong enough to keep children safe in cribs.